All About Tickler Files: Leveling Up Your 43 Folders Game

A tickler file is an analog reminder system: a way to deliver documents and information to your future self.

You might also hear other names for the tickler file: a pending file, a future file, a boomerang file, or of course, the 43 folders system.

In the early 2000s, David Allen and Merlin Mann popularized the tickler file, which has been used by administrative types since the early 20th century, if not earlier.

Tickler files are worth all the hullabaloo. If you don’t have one, you should create one toot sweet, as we say in Texas French.

Use a tickler file for reminders, documents, and information that you will want to have your hands on, at a future date.

A tickler file is really several file folders that always stay together, in a set of 43: 12 files labeled with the names of each month in the year, plus numbered folders for each numeric date in a month, 1-31.

The numbered folders are always for the dates in the current month. The month folders are for future months.

With a tickler file, your Present Self is sending reminders or documents (sometimes even small objects, like flash drives or keys) to your future self.

But they are positively genius for helping you remember birthdays and anniversaries.

How A Tickler File Can Save Your Personal Relationships

Let’s say your sister’s birthday is on August 2. Let’s say you want to snail mail a birthday card to her that arrives by August 2, and then you want to text her on the date of her birthday.

And let’s say she is a great sister, but she always feels hurt if she thinks you forgot her birthday. Which you do, every year.

Birthdays are a thing with her… and she always remembers YOUR birthday… so there’s also that.

Tickler file to the rescue!

Write a reminder for yourself, and drop that note into the “August” folder. When August 1 rolls around, you pull out all the papers in the “August” folder, and move them into the numeric slots since August is now the current month. You move the birthday reminder note to the “2” folder, since her birthday is on the second. When you look in the “2” folder, there it is, your reminder to text her on her birthday!

But did you notice that your sister had the audacity to be born really early in the month?

And by the time you realize it is August (August 3 or 4), you have already missed her birthday — again! — and you are now in the doghouse, again?

Stand back, and watch this amazing trick: Put a note to yourself in the “July” folder: “Buy birthday card for Sister (birthday: Aug 2).”

In July, you see that note to yourself. Ha!!

And THEN: You buy the card in early July, you sign and address the card ahead of time, you stamp it so it’s all ready to mail…

…and then, you stick that card in your tickler file in, say, the “24” slot, on the date you want to mail it! Toward the end of July! On the 24th, you pull the birthday card out of the slot, drop it in a mailbox, and she gets the card on time for her August 2 birthday!

Now, you are the best sibling ever! How cool is that?

Bonus: stick that reminder note back in the “July” slot, so you can triumph again next year.

My tickler file is why my family still speaks to me. (Many of them also had the audacity to be born very early in the month.)

I never remember people’s birthdays in time… but my tickler file does.

Now, let’s talk about how to make this easier than 43 physical paper folders.

Now I’m going to show you how to set up a next level tickler file.

Forty-three folders is too much work. You’ve got to label them. Then you’ve got to shuffle individual folders around every day, which takes time and hand-eye coordination. Assuming you even remember to do this.

Worse, you can lose things between folders. Notes and papers — especially if they are small, like appointment cards — can slip between the folders to the waiting maw of the file drawer below, and then the thing is lost forever unless you clean out your file drawer; and who does that?

Since tickler files store such mission-critical information, we don’t want any papers descending into the abyss.

Use a Chronological File Sorter as Your Tickler File

File sorters are paper engineering at its finest. I’ve written about alphabetical file sorters, which may or may not be useful for you; but I use my chronological file sorter every single day.

They also take up much less space than forty-three paper folders. File sorters are like giant books, where you slip documents between the (labeled) leaves.

Use a chronological file sorter as your tickler file.

Here is what one looks like, closed — the slots labeled with numeric dates are in the front: 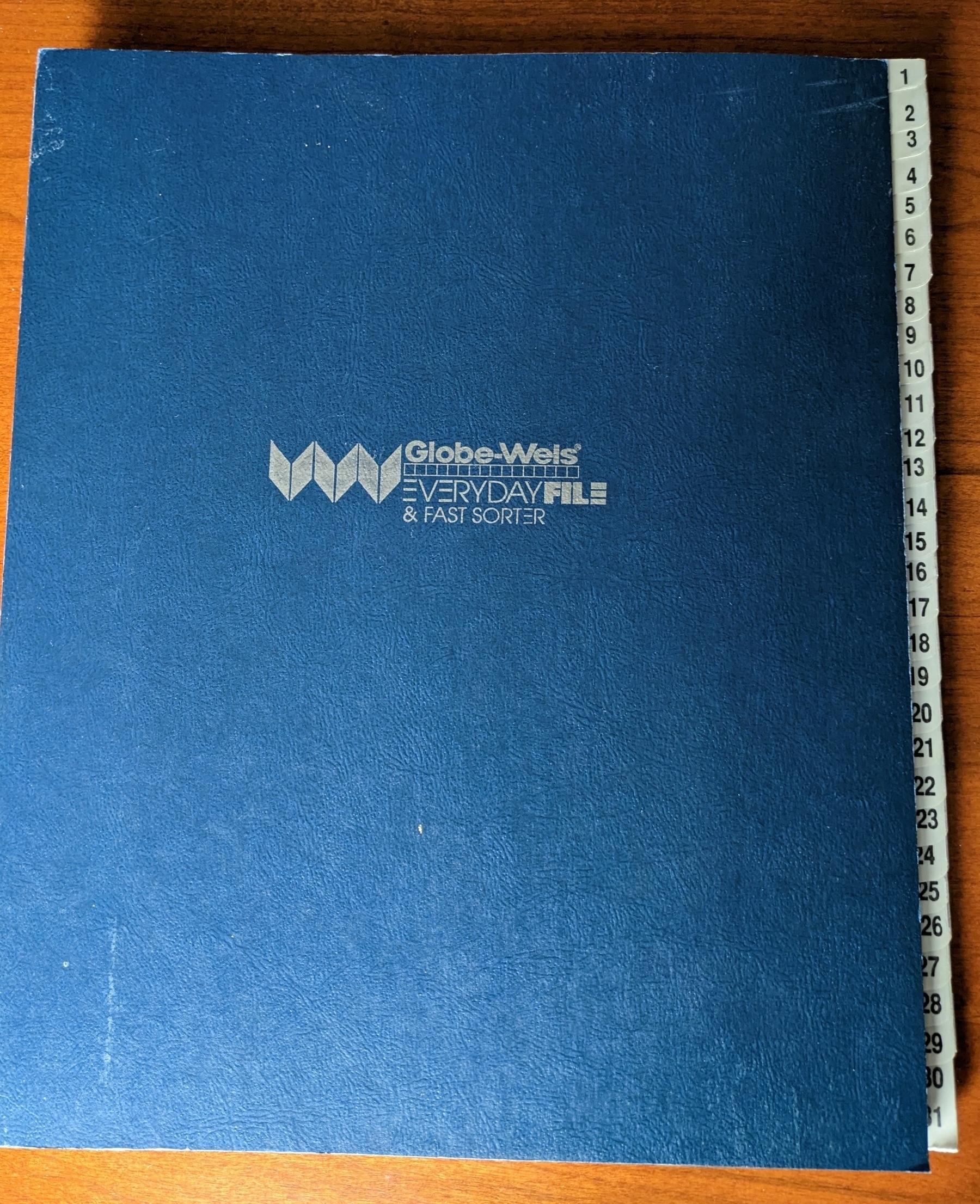 Here is what one looks like, opened — the slots labeled with the names of the months are in the back: 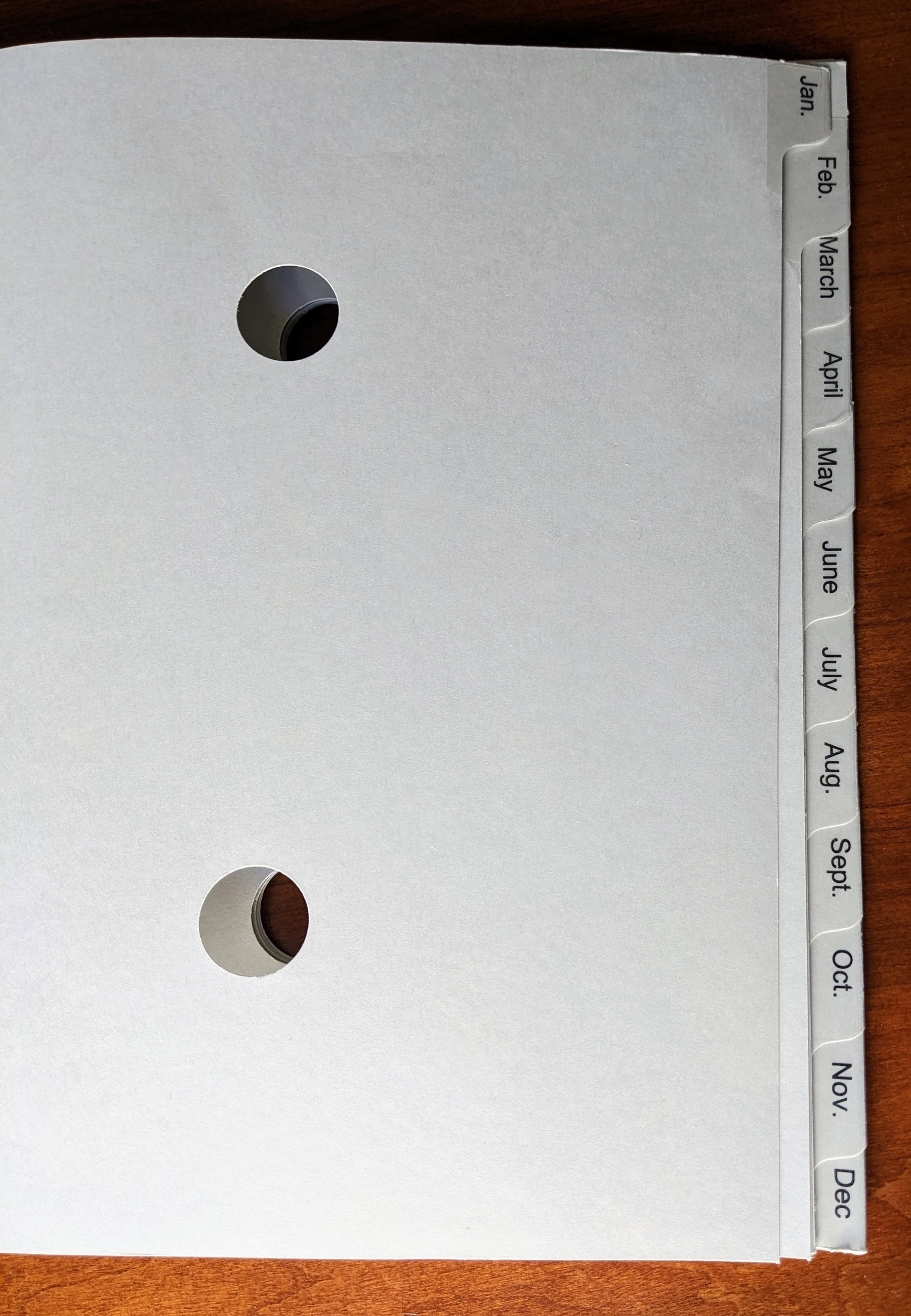 However, we want our tickler file to sit upright, so we can wing papers into the slots as if they were regular upright folders.

Get two regular file folder hangers, and then duct tape* them together to make the bottom bigger.

Then, stick your file sorter into the enlarged file hanger, and drop the whole thing onto the railings of a file drawer or portable file box.

You want the file jacket to hold the sorter upright; but still be loose enough to allow you to flip through the date and month pages.

Now, get seven binder clips and label them for the days of the week with your trusty silver Sharpie pen. 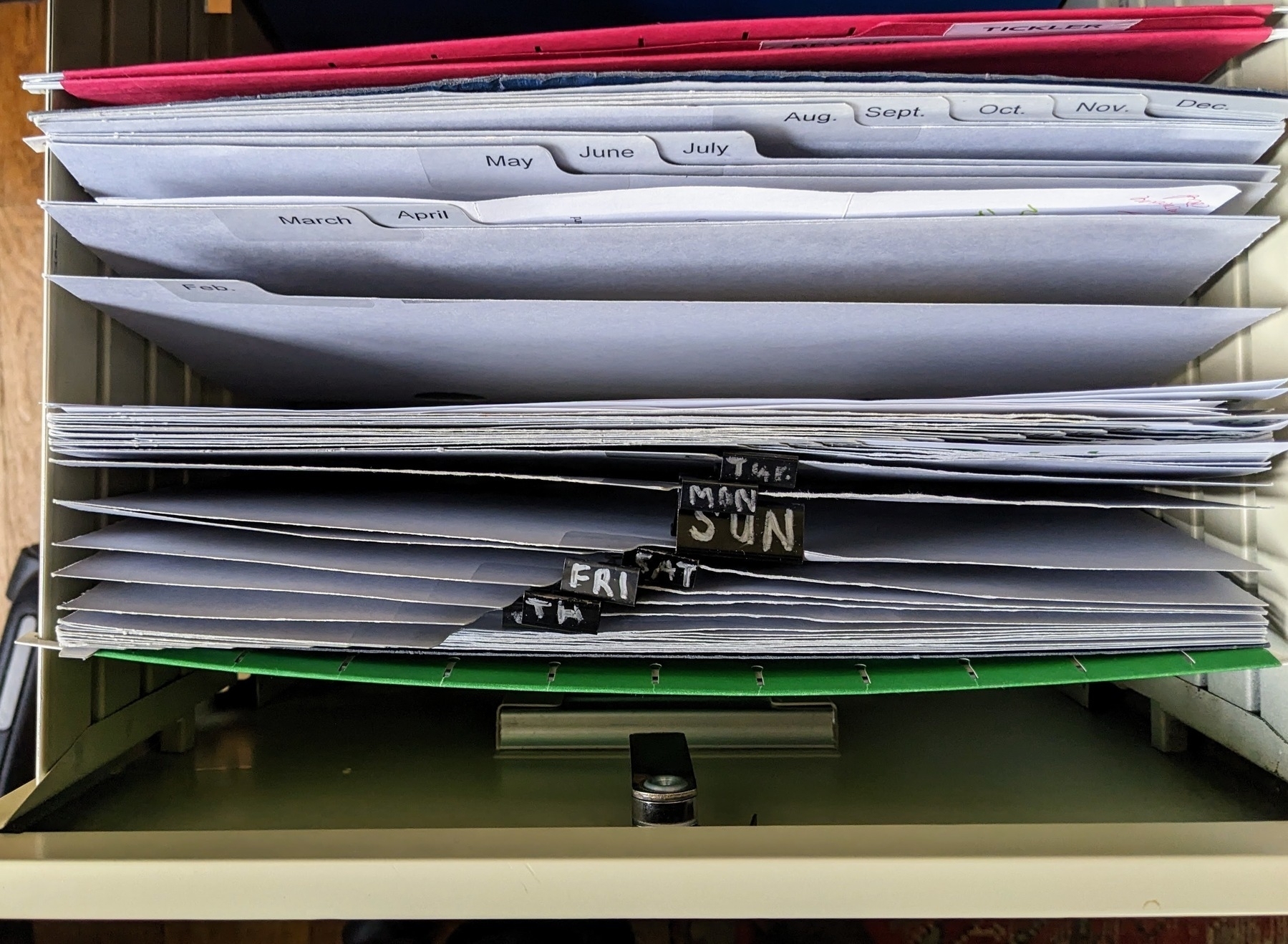 You might occasionally drop something in the wrong slot; but a file sorter does not have any gaps for papers to fall through, and it’s much less ambiguous which slot is which.

Set Up ONE MORE FOLDER with Your File Sorter: a “Beyond Current Year” Folder

But I do use one regular paper folder. Behind my file sorter — the main tickler file — I hang a folder labeled “Beyond Current Year.”

Every January, when the calendar year changes, I plunge my hand into this folder and pull up the notes and papers. What exciting things will happen this year?

Well, this year, I need to renew my passport; and I have an eye exam in July, with a paper I need to bring for the exam.

So I drop the reminder to renew my passport into a month file which is a few months before the passport will expire; I put the eye exam information in the “July” folder.

In my “Beyond Current Year” folder I also have exciting things up to the 2030s (tetanus booster renewal). But I don’t need to pay attention to those until after 2023. They’ll wait patiently there, until I need them.

I don’t know if my current calendar or reminder apps will still be around in the 2030s, but my paper tickler file probably will.

And unlike a subscription service for an app, I only had to pay for my file sorter once. In the 1990s.

How I Remember to Use My Tickler File

Tickler files are pretty easy to set up. The hardest part is getting into the habit of actually checking your tickler file.

I’ve outsourced what I laughingly call my memory to all kinds of checklists.

I created two checklists**, one to start my work day, and one to close my work day.

My morning checklist tells me this:

My daily shut-down checklist tells me this:

With my tickler file, I rarely have them.

* Is there anything more useful than duct tape? I don’t think so.

** If you can get yourself into the habit of checking your checklists, good things will follow.

If you have no space for full-size files, you can still make this system work, by using an index card box. (Recipe boxes can work nicely, too.) Let’s say you have a document that you need to bring to a meeting on a certain date, that won’t fit into the card box. Write a note to yourself that names the document, and describes where you have stored it, and file the note in the tickler card box. Pick up some tabbed index card dividers to make it easier to label them. (You can probably even find some with month names and calendar dates.) Good quality tabbed index card dividers are made of heavier card stock than a regular index card, so they can endure some wear and tear. Thanks to @JMaxB for mentioning this!